Free shipping on catalog antibody and protein orders over $498. More>>

Our technical experts are here to help.

If your question has not been answered, please contact our technical support team for further solutions.

1. Do you offer product samples before I make a full purchase?

Of course! We offer trial-sized samples for testing purposes. We also offer a replacement or refund when needed. Please sales specialists for more information.

2. Are the datasheets accurate and up-to-date?

ABclonal will always provide the latest information about all of our products. If you have any questions, please contact our sales team for details.

3. How should my antibodies be stored and centrifuged?

See below for guidelines concerning proper antibody storage and centrifugation:

4. How should I aliquot my antibody?

ABclonal does not recommend researchers to aliquot the antibody products because it will cause evaporation, condensation dilution, adsorption, and other processes that will affect the concentration and effectiveness of the antibody. The smaller the individual aliquots, the larger the loss.

5. Are there any publications that cites the use of this antibody?

LAMP1 has both a 47 kDa and a 120 kDA band. They are both considered specific bands.

After visiting the Uniprot website, http://www.uniprot.org/uniprot/P11279 , we found the predicted MW to be 45 kDa.

This target has many glycosylation sites as shown below.

Therefore, the detected MW will be larger than the predicted band because of these modifications. You can always compare the testing results with other companies to confirm. We used Abcam’s and Cell Signaling’s results as examples, shown below.

Please see the testing results of ATG5 as an example, shown in the diagram below. 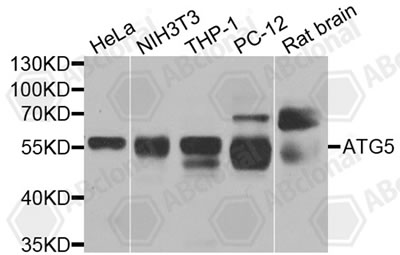 The predicted MW of ATG5 is 32 kDa. ATG5 doesn’t undergo glycosylation. However, the ATG5 protein can combine with ATG12 to form a stable protein complex.

According to this information, we can conclude that the MW of the detected band is ATG5+ATG12. We can refer to the testing results from other companies, as shown below. Taking these data into consideration, the 55 kDa detected band of ATG5 is the specific band. 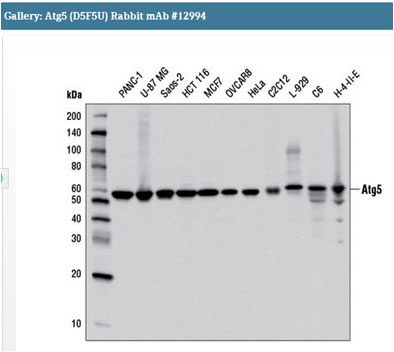 Please see the testing result of LTF protein below. The predicted MW is 78 kDa, but our result is around 50 kDa.

We have questions about the testing result and we could not find the relevant data on the Uniprot website. However, we found that LTF protein could be hydrolyzed into two band, 50 kDa and 30 kDa. So the detected band of LTF was the specific band (This protein has 2 isoforms produced by alternative promoter usage. The human LTF can be isolated into two fragments, a N-terminal tryptic fragment having a Mr of 30 kDa and a C-terminal tryptic fragment having a Mr of 50kD by a mild tryptic digest (PMID:3790094).

7. Are any preservatives added to your antibodies? Have they been shown to affect experimental data?

Yes. Our antibodies contain a non-protein preservative called thiomersal (at 0.01% w/v concentration). It functions as a microbe inhibitor and prevents microbial contamination.

Some companies also add NaN3 to preserve their antibodies. However, due to its nature, antibodies that contain NaN3 cannot be used with/to:

1. Living cells, stain living cells, or conduct in vivo experiments. NaN3 impedes microbes, at the same time, it is toxic to most other organisms because it blocks the mitochondrial cytochrome electron transport system. On the other hand, thiomersal is not toxic to organisms.

2. Couple with chemicals in the amino group because NaN3 interferes with the coupling. While NaN3 can only be added as a preservative after the coupling process, 0.01% of thiomersal can be present during the entire process due to the absence of primary amines.

8. How long does it take to produce a custom antibody? What is ABclonal’s success rate?

It typically takes between fifteen and seventeen weeks to produce a custom antibody. Our protocol is as follows: Cloning -> Expression -> Immunization -> Affinity Purification -> Testing.

Cloning: We select the expression vector template according to the project report. We sequence the clones to confirm the expression vector. This process takes about two weeks to complete. The customer has the option to provide their own template (15+ μL) and sequencing results. This may save some time.

Expression: We use a prokaryotic species to induce expression of our sought-after vector. This will take two weeks. The customer has the option to provide the expression vector and reference chart to save some time.

Immunization: It takes 68 days to run our immunization protocol. Our rabbits undergo four immunizations, with the final round proving to be instrumental in developing top-notch antibodies. The customer has the option to test the antiserum after the third immunization for their purposes if he/she is under time constraints.

Affinity purification: Our custom antibodies are almost always at a concentration greater than 1.0 mg/mL. When diluted 1:1000, the antibody will be able to detect 10 ng of antigen. This process will take about three weeks.

Testing: It will take about 3 weeks to test the antibody. And then about 10 days to purify it.If the customer wants, we are able to send the test sample to him/her for endogenous testing. We are able to run antigen testing at the same time.

Note: There are a few antigens that may not be detectable due to inherent properties.

Note: Due to the variability in endogenous testing, we cannot guarantee this result. We will, however, share the risk. If the endogenous testing fails and ABclonal is unable to troubleshoot the problems successfully after reviewing the data and collaborating with the lab members, we will only charge 50%!

After analyzing our more than 5 years of custom antibody project data, the probability of successful endogenous detection using the expression route is 70-80% while the peptide route is 60-70%.

9. Should I use monoclonal or polyclonal antibodies?

It depends. Monoclonal antibodies and polyclonal have their own characteristics and advantages, the choice of antibody should be based on experimental needs.

In comparison, each monoclonal antibody only has one epitope recognition site, so the specificity is generally strong, but once the epitope is blocked or destroyed, it loses the binding capacity. Hence, it is not suitable for protein enrichment experiments such as IP, Co-IP, and ChIP. While a polyclonal antibody has multiple recognition sites and has binding capacity even when one epitope site is blocked or destroyed. However, this also means that polyclonal antibodies have relatively weaker specificity.

10. Can this antibody be used for in vivo experiments?

Yes, for research purposes only, not diagnosis.

11. Can I use this antibody in an untested application or species?

12. Can primary antibodies be reused?

ABclonal does not recommend reusing polyclonal antibodies because their composition is relatively complex. Effective epitopes will be greatly reduced after recycling, resulting in dark background or nonspecific phenomenon. However, if researchers would prefer reusing the product, a small amount of fresh antibodies could be added after recycling.

Monoclonal antibodies are generally recyclable for several times because they only have one epitope recognition site. This means that recycling would only lead to reduced concentration not effectiveness.